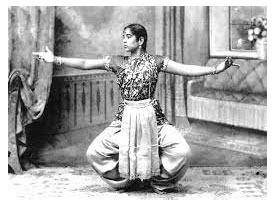 Dasiattam is an ancient Indian Classical dance form which derives its roots from the Natyashastra. Originating from many regions of South India, its name is derived from the Devadasis, who were considered to serve the Gods through their art. This art form was developed by the Dravidians in the pre- Aryan era and was practiced by the devadasis in Temples and royal Courts. Dasiattam was influenced by Buddhism as well and during that period, Buddhists found it unnecessary for dance to be presented in Temples. With the advent of Vaishnavism, many temples were constructed for the performance of devadasis.

In the 16th Century, as the Vijaynagar Empire started weakening, DasiAttam with a reasonable influence of Muslim culture, moved to the Courts of the Deccan sultans. During the British rule, the davadasis were looked down upon as the colonial rulers believed that religion could not be expressed through dance. The culture was considered immodest and the dancers were equated with prostitutes. Both the Britishers and Hindus alike started to reject the prevalence of Dasiattam and allowed this heritage to decline.

The revival of the dasiattam came early in the 20th Century, with the perseveration of pioneering people like E. Krishna Iyer along with many others, who helped in the re- emergence of Dasiattam in the modern society. They enabled the dancers to perform onstage in front of audiences and helped the art and artistsgain dignity. Soon, dancers emerged from all strata of society and broke the caste barrier associated with it. Rukmini Devi Arundale made a huge contribution in the field of dancing by establishing Kalakshetraand making it more appealing to the upper castes and classes, finally converting it into the more dignified ‘Bharatnatyam’.

The journey of Dasiattam from the temples to its final refined version called Bharatnatyam and being put on stages in dance halls and theatreshas been truly astounding. It is a beautiful blend of emotion, rhythm, expression and emotion – a dance form complete in itself, with a proper structured margam (repertoire) and huge popularity, audience and reach.